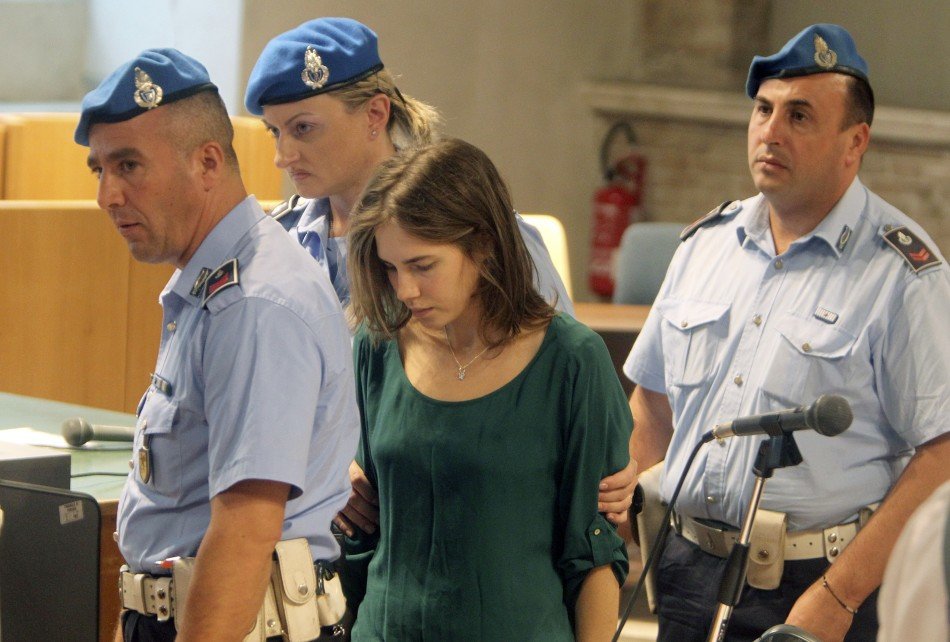 With the appeal coming up at the end of this month, there has been a lot of news about the apparent weaknesses of the DNA evidence used to convict Amanda Knox and her boyfriend Raffaele Sollecito in the murder of Meredith Kercher. After a Twitter discussion with Doug Bremner (dougbremner.com) I was inspired to learn more about the case and offer some insight on some of the DNA issues.  I quickly learned that there is a veritable ton of information online about the case, and I have included some helpful links at the end of this post.

This case is a defense DNA expert’s dream! I would love to have access to the testing results, notes, data, procedures, etc. and compose a cross-examination for the Italian forensic scientist who performed the work. There are several influential DNA experts from the U.S. that have weighed in on this case already. Having said that, let me offer the standard disclaimer that I am not an official expert on the case and have not seen actual data, protocols, reports, etc.  I have therefore decided to touch just generally on the apparent evidence and facts of the case, and focus more on overall themes and concepts that are common to many DNA cases.  I hope that this will provide valuable insight to the public.

First, let me lay the groundwork by noting some of the basic apparent facts of the case.  Meredith Kercher was found murdered with slash wounds to the throat at her residence.  Her body was found partially disrobed and there was evidence of sexual assault.  Amanda Knox was Meredith Kercher’s roommate.  Ms. Knox’s boyfriend, Raffaele Sollecito was also convicted of the crime.  The first individual to be convicted was Rudy Guede.  DNA tests from the body and from a bloody fingerprint in the room came back to Guede, and there was apparently no question as to his involvement.  However, the Italian authorities surmised that this criminal act also included involvement from Knox and Sollecito. The key pieces of physical evidence proffered as showing their involvement were a knife found at Sollecito’s residence and Kercher’s bra clasp found at the crime scene. Knox and Sollecito were convicted and sentenced to approximately 25 years each.

A knife collected from Sollecito’s residence was tested for blood and DNA.  No blood was detected on the knife.  DNA testing of a swab from the handle apparently was consistent with Amanda Knox. Without having reports, data, etc. it is not clear to me how strong of an association was found to Knox, but let’s assume that they obtained unequivocal results demonstrating the presence of her DNA on the handle.  Considering the fact that she was known to spend time at the apartment and cook, the finding of her DNA on the handle is of no particular probative value. Consider also, that there is no way to date when the DNA consistent with Knox was deposited on the knife handle.  With the increased sensitivity of modern DNA testing, items that have simply been touched, or handled (like the keyboard you are using now) will contain detectable amounts of DNA.  Unlike the situation with blood or semen, the exact bodily source of this touch DNA cannot be determined, however it can be from skin cells, perspiration, etc. It is also important to understand that minute amounts of DNA that have been transferred by touch can now be detected. For example, I could shake your hand and then touch an object and transfer your DNA to the object under certain conditions.

Although no blood was detected on the blade of the knife, a trace amount of DNA consistent with Kercher was obtained.  The techniques and results obtained for the DNA on the blade are hotly contested it would seem.  Apparently the results were rather low-level and partial. It is important to note that the DNA was consumed in the analysis and therefore any independent re-testing is impossible. I am often asked to be present during analyses at crime labs when testing will consume the DNA evidence.  This is a basic right of defendants in the U.S. Apparently, there were several testing attempts made by the analyst to get results from the blade, and testing parameters may have been stretched.  From what I understand about the quality of the results, the statistical significance of the inclusion of Kercher (if even scientifically defensible) should be quite low.  Shockingly, laboratories sometimes will report the inclusion of someone as a possible DNA contributor without offering a statistic that quantifies the association. If the DNA results are partial and low-level, statistics can actually be quite low, such as 1 in 4!

Testing for blood in a crime lab is typically first done by simply visually examining an item for possible stains, often with magnification. Suspected stains are then subjected to presumptive tests for blood which are highly sensitive, but not specific.  A positive finding indicates the possible presence of blood (not necessarily human), however other things can cross react with the test, so it is not a confirmation.  The real value of the test is how sensitive it is.  With a negative result, laboratories can confidently report that not even a minute trace of blood was detected.

It sounds as if there were no visible stains on this knife.  Laboratories may do a general swabbing of a surface just to see if trace blood may be present.  An argument in this case for the absence of blood, is a potential clean up with bleach. It is interesting to note that bleach will result in an inconclusive presumptive test result for blood when using a test such as TMB, which I understand was used in this case.  If in fact an inconclusive result for blood was not obtained during TMB testing for blood, it may suggest that traces of bleach are not present.  It is also not clear how a clean up theory explains the blood traces being removed, but not DNA traces.  Since the presumptive testing for blood is rather sensitive, any DNA detected can positively not be associated with coming from blood.  Blood contains a high level of DNA.  As to whether some cellular material from the blood somehow survived a bleach cleaning, well….I suppose its not impossible, but there any many other explanations for the presence of DNA in this instance. Certainly when DNA results are extremely low-level and obtained by potentially too-aggressive typing methods, the interpretation of their significance is practically impossible.  Contamination also has to be considered in these instances.

Apparently the bra clasp was not collected until 47 days after the incident.  Immediately, there are questions about the integrity of this evidence.  This is particularly true since crime scene documentation is said to show the clasp at different locations inferring that it had been moved around during the investigation.  As with the knife, there is no possibility of a second, independent DNA test due to consumption of sample and issues with its preservation.

DNA testing of the clasp apparently indicated a mixture of DNA with Kercher the likely major contributor, and Sollecito not being excluded as a minor contributor.  Once again, we do not know the statistical significance of Sollecito’s inclusion, but mixtures are more difficult to interpret and the statistical significance of the inclusion of minor contributors is often quite low.  Even if it is assumed that there is a low level of Sollecito’s DNA present on the clasp, what does it prove? There is no way to determine when or how the DNA was deposited.

In order for the DNA experts in this case to fully vet the conclusions, results, procedures and interpretations reached, there are several items of discovery that are needed.  DNA testing reports themselves actually tell very little about the testing.  Typically, there are hundreds of pages of notes, data, photographs, etc. that are critical in determining the analyst’s approach, any issues with quality, the true nature of the evidence, and whether protocols were appropriate.  The actual DNA testing produces raw, electronic data that another analyst can use to independently interpret the DNA typing data.  The laboratory’s specific protocols and interpretation guidelines are necessary for a reviewer to determine if conclusions made in a report are warranted, and what shortcomings they may have. It is also important to obtain the quality record of the laboratory and the analyst to determine the prevalence of mistakes, contamination, etc.

Based on recent news reports, the defense DNA experts in the Knox case have not been provided with the materials they require to conduct a thorough review of the DNA typing. I routinely find myself fighting battles to obtain complete discovery in DNA cases that I review in the U.S.  With the stakes so high, the defense absolutely has a right to perform their due diligence.

In closing, I hope that this post provides a general understanding of the issues surrounding DNA cases and the intricacy of the analysis and interpretation.  Forensic DNA testing is not akin to clinical testing in which ‘yes/no’ or ‘positive/negative’ results are always obtained.  While the technology of DNA testing has advanced remarkably in its short history, the increased sensitivity presents interpretation challenges. It can be at times ‘too sensitive for its own good’.  It is interesting to note that the ability to pinpoint exact bodily sources of DNA has not kept pace with DNA testing advances.  Human blood and semen can be positively identified, testing can strongly suggest the presence of saliva, but other body fluids simply cannot be positively identified.

I recently attended an interesting presentation by Donald Johnson at the California Association of Criminalists DNA workshop that dealt with characterizing bodily source of blood stains.  For example, is victim blood at a suspect’s house from an innocent finger cut, or does it contain molecular markers that illustrate that the blood came as a result from a gunshot to the head, and thus contains trace brain material?  These are exciting advances that will hopefully make forensic DNA evidence easier to interpret.

Note:  as I am completing this blog post, I have received more specific DNA information on the case and look forward to reviewing it and potentially offering a more specific opinion.

With the appeal coming up at the end of this month, there has been a lot of news about the apparent weaknesses of the DNA evidence used to convict...

With the appeal coming up at the end of this month, there has been a lot of news about the apparent weaknesses of the DNA evidence used to convict...