Closing arguments are now underway in the Amanda Knox appeals trial. In late July I posted a blog entry about the first part of the Conti-Vecchiotti report.  At the site, http://knoxdnareport.wordpress.com, a completed translation of this report is now offered.

This item of evidence was given the designation ‘165B’/sample ID code 48896 and described as “Clasp of bra with small portion of white-colored fabric attached, stained with presumed blood, found in the room of the victim (formerly Exhibit Y).”  The following additional information was reported:

No testing for blood or any other body fluids was conducted on the clasps.  The Conti-Vecchiotti Report opines that an attempt should have been made to microscopically identify any cellular material present (refer to part 1 for my thoughts on the usefulness of microscopic identification of cellular material other than spermatozoa).  Any DNA therefore detected is not of a known bodily origin.  There is no specific test that can say that DNA was deposited from the touch of a hand (with the exception perhaps of an identifiable fingerprint).

The DNA extracted from the clasps was of sufficient quantity for testing multiple times.  The average (2 repetitions) quantitation value was .115 ng/ul with a total extract volume of 50 ul.  Thus, approximately 5.75 ng was obtained from the clasps.  This is sufficient to perform multiple amplifications assuming the DNA is of decent quality and not heavily degraded.   Apparently the actual DNA quantitation kit used was not specifically listed, though the instrument (7700 Sequence Detector) was.

A portion of the original testing report is presented below:

According to this table, there were two areas of the exhibit that were extracted and quantitated.  Using Google Translate, the areas are as follows:

It appears that the quantitation values discussed above would be for ‘Trace B’.

According to the original testing report:

The Yfiler™ kit was also used to perform YSTR testing, which is specific for male DNA.  YSTR testing is particularly helpful for samples on which female DNA is mixed with male DNA since the female DNA is not detected in the testing giving a clear picture of the male DNA present in the sample.

The results for the Identifiler™ STR testing of Trace B (this data is from the original testing report according to the Conti-Vecchiotti report) are shown below:

Focusing on the gender determination locus (Figure B), Amelogenin, the results illustrate that both male and female DNA are present, with the female DNA being in apparent excess.

According to the Conti-Vecchiotti report, the following conclusions were originally made:

“a genetic profile (Table 165-I) deriving from a mixture of biological substances belonging to at least two individuals, at least one of male sex.”

“Comparison of the genotype deriving from trace B of Exhibit 165 with those belonging to Raffaele SOLLECITO and Meredith Susanna Cara KERCHER (comparisons performed respectively with the genetic profile reported on p.63 Table 30-I, referable to Exhibit 30 and with the genetic profile reported on p.50, referable to Exhibit 21, table 21) yielded a result of compatibility, i.e. the genetic profile shown in Table 165-I is compatible with the hypothesis of mixture of biological substances (presumably flaking cells) belonging to Raffaele SOLLECITO and to Meredith Susanna Cara KERCHER“.”

In the table below I have entered the allele calls reported for the bra clasps along with the profiles for Meredith Kercher and Raffaele Sollecito.

The results indicate a mixture of DNA from at least two individuals. There is a clear, major profile that is consistent with Meredith Kercher.  There is a minor component(s) from at least one male.  Raffaele Sollecito is included a possible minor contributor.  No alleles were reported that could not be accounted for by DNA from Kercher and Sollecito.

It was noted that there was contention of the interpretation by Prof. Pascali during the preliminary hearing in 2008.  The contention was that there are additional DNA peaks present that were wrongly dismissed by Stefanoni as stutter artifacts.

Stutter is a known artifact that occurs with STR testing.  A smaller stutter peak generally appears one unit shorter than the actual allele, as seen below:

In this example, a 14 allele is present and a 13 peak appears as a stutter artifact.

While stutter can complicate interpretation, particularly in mixed samples, it is a well-documented and characterized phenomenon for which interpretation guidelines can be readily developed.  This is done by calculating a stutter percentage using the heights of the peaks (measured in a unit known as “RFU”) in the electropherogram.  The higher the peak, the greater quantity of DNA that was detected.

The manufacturer of Identifiler™ provides suggested stutter filter values that range between 5% and 17% depending upon the locus.  In the US, forensic DNA laboratories typically will also conduct studies on stutter when implementing a new typing system and often develop their own criteria for stutter percentages.

Because the electropherogram presented in Figure A above does not give specific peak heights, it was not possible for Conti and Vecchiotti to independently interpret those results with regards to stutter.  In 2011, Conti and Vecchiotti were provided with data on a CD-ROM that included an electropherogram with labeled peaks.  They noted that the electropherogram had an overall weaker result than the one that was included with the original DNA testing report.  They proceeded to analyze the newly obtained electropherogram with regards to stutter.  It is not clear how or if the discrepancy between the data received in 2011 and the original 2008 report data was resolved in reading the Conti-Vecchiotti report.

After considering the electropherogram (Figure D), Conti and Vecchiotti made the following conclusions:

Here is how the results look if you insert the additional alleles that Conti and Vecchiotti enumerate (in parentheses).

The net effect would not change the fact that DNA consistent with Kercher is predominant and that Sollecito is included as a potential minor donor.  The additional alleles would indicate that DNA is actually present from at least 3 individuals on the bra clasps and would likely complicate the statistical calculation of the significance of Sollecito’s inclusion.

I found it interesting that in reading the report 15% is apparently cited as the international standard for stutter cut off.  While in general it is true that stutter does not exceed 15%, it is locus-dependent and lower levels of stutter are expected at several loci.  Most US laboratories apply a unique stutter percentage cutoff to each locus.  Thus, using 15% as a cut off may unnecessarily filter out peaks that are in fact truly alleles, if used as the standard for all loci.  This is definitely a conservative approach.

The DNA extract was also analyzed for male DNA using the YSTR technology in the Yfiler™ typing kit.  According to the Conti-Vecchiotti report, the electropherogram below was used to make the conclusions in the original testing report.

In the table below I have entered the allele calls reported for the bra clasps along with the YSTR profile of Rafaelle Sollecito.

The results as reported indicate that DNA from one male is present, and the male DNA is consistent with Raffaelle Sollecito.

In 2011, Conti and Vecchiotti were provided with the electropherogram below (Figure G1 and Figure G2) which contains “….indications relative to the height and the areas of all peaks present..”

As with the Identifiler™ testing, Conti and Vecchiotti believe that there are additional alleles present that should have been reported (indicated by arrows in Figure G1 and G2).

The additional alleles pointed out are of significantly less height than the alleles associated with Sollecito, so if they are actual DNA and not artifactual there is DNA from additional males in lower quantity.

Below is a table from the Conti-Vecchiotti report showing the original allele calls (RTIGF), what Conti-Vecchiotti felt should have been called (NS LETTURA), and the ‘additional’ alleles (ALLELI NON LETTI).

There are numerous alleles above 50 RFU that are not in a stutter position that were not reported.

Another point to consider with both the Identifiler™ testing and the Yfiler™ testing on the bra clasps is the fact that when the DNA results from the knife blade were interpreted, alleles below 50 RFU were included.  As to why such weak alleles were reported in that instance and not for the bra clasps, clarity is needed.

In addition to stutter, there are other artifacts that can occur and need to be accounted for.  DNA analysts import ‘raw’ data from capillary electrophoresis instruments into software that assists in evaluating the DNA profiles.  The DNA analyst can review peaks by zooming in and looking at height, morphology, and location to assist in determining if they should be reported as DNA alleles.  The printed data can be edited by the analyst to show only the peaks being reported.  Thus, it is imperative that a reviewer have access to the raw data and be able to independently evaluate the raw data in the necessary software to determine if the reported alleles are consistent with the actual data.  The laboratory’s interpretation guidelines are another necessity for the review.

Without the benefit of the full DNA discovery needed to perform a thorough review, taking into consideration both the Identifiler™ and Yfiler™ results it does nevertheless seem to me that there are likely more DNA donors present on the bra clasp than were actually reported.

What then does the DNA evidence on the bra clasp mean?  It is no surprise that Meredith Kercher would be the primary DNA donor on her bra clasp. Her DNA would be expected to be deposited on the clasps by her touching the clasp and by the clasp presumably having contact with her skin when the bra is worn.  The DNA on the bra clasp that is consistent with Sollecito is at a much lower level and there is no information as to what type of cellular material is responsible for the DNA.  It is not known when the DNA consistent with Sollecito was deposited on the clasp.  Based on the ‘additional’ peaks flagged by Conti and Vecchiotti there may well be DNA from multiple males in low quantity on the bra clasps.  It does not seem likely that multiple male individuals would have touched the bra clasp with their hand.

It has to be kept in mind that DNA testing is now extraordinarily sensitive, perhaps to a fault.  DNA laboratories go through great lengths to ensure that DNA from analysts or other cases does not end up associated with evidence that is being processed.  Laboratories and the tools used are almost obsessively cleaned with bleach solutions, and protocols include many steps to minimize the chance for contamination.  Nevertheless, every DNA lab sees contamination at some point. The bottom line is that DNA can be easily transferred, and today’s sensitive DNA tests can detect transfers of low levels of DNA.

The final issue covered in the Conti-Vecchiotti report is the collection of the bra clasps and procedures used at the crime scene.  Among the many issues raised was the following:

“The initial position of discovery on the floor of the clasp was not the same after 46 days; and moreover it was touched several times in succession by several operators, after having been collected from the floor, and repositioned again on the floor”

Closing arguments are now underway in the Amanda Knox appeals trial. In late July I posted a blog entry about the first part of the Conti-Vecchiotti... 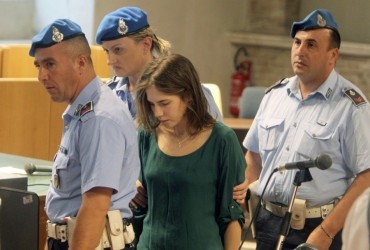 Closing arguments are now underway in the Amanda Knox appeals trial. In late July I posted a blog entry about the first part of the Conti-Vecchiotti...